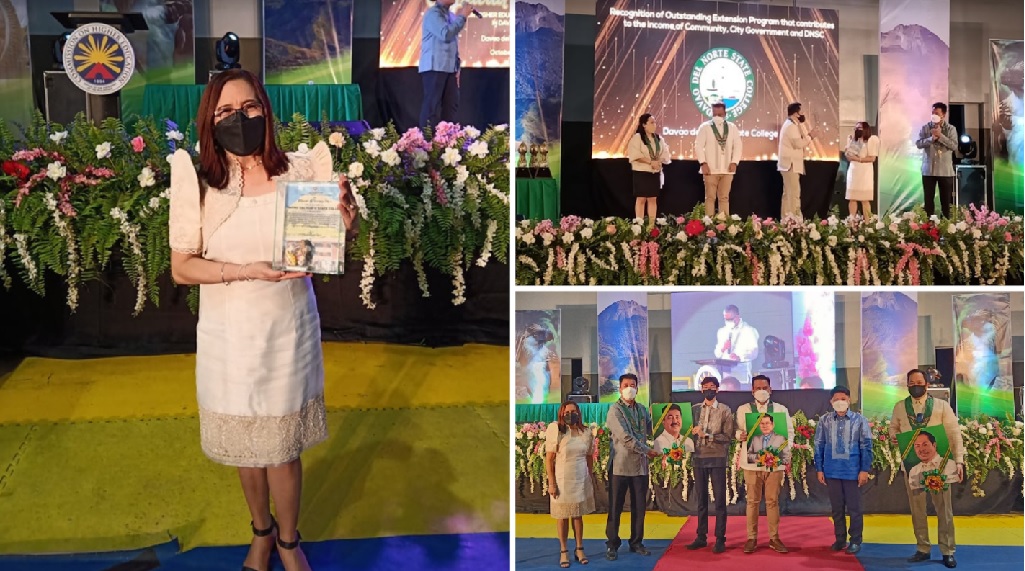 PANABO CITY – The Commission on Higher Education Region XI has awarded a plaque of recognition to Davao del Norte State College for the establishment of the Taklobo/ Tridacna Tours: Conservation and Livelihood Opportunities of Coastal Communities in the Island Garden City of Samal (IGaCoS). The award was received by College President, Dr. Joy M. Sorrosa, during the Gawad Parangal 2021 at the Davao del Sur Coliseum last October 15, 2021.

The award was personally handed over by the event’s guest of honor, Dr. J. Prospero “Popoy” De Vera III, Chair of the Commission on Higher Education (CHED), Dr. Aldrin A. Darilag, CHED Commissioner and Chair of the DNSC Board of Trustees, Atty. Ryan L. Estevez, Executive Director of UNIFAST, and Dr. Maricar R. Casquejo, Regional Director of CHED RO XI.

The recognition highlighted the impact of Taklobo Tours in making the Taklobo Farms as one of the most sought-after educational tourist destinations in the region and how the project has helped in the income-generation of the residents of Barangay Adecor, the city government of Samal, and DNSC, as well. The event was also a celebration of the UNIFAST’s anniversary and the Region XI leg of Chair De Vera’s Padyak Initiative: Claiming Victory for Philippine Higher Education. During the closing ceremonies, three visual artists from DNSC gifted the guests of honor their digital portraits. The students were also the College’s representatives and winners in the CHED RO XI Digital Painting Contest. They were Mel Zaimen Vallescas, Michael Aaron Puzon, and Darel Dan Ramos.