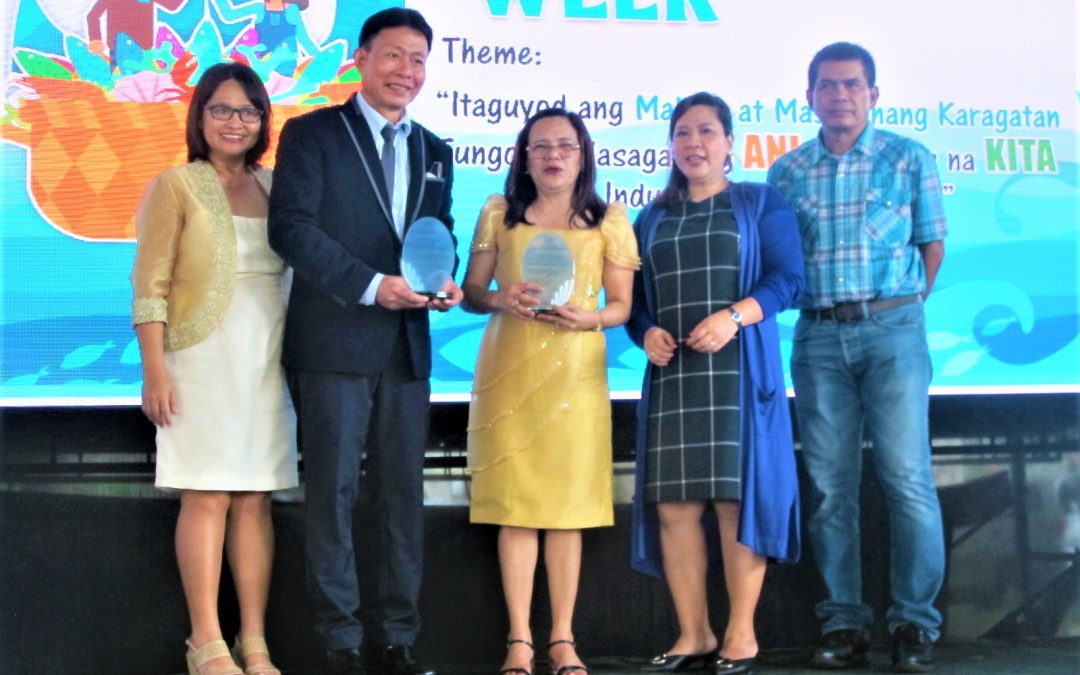 Davao del Norte State College (DNSC) bears pride of its history as a former secondary school that catered to the fishing communities of Panabo City. Although its reach and mission have expanded through the years, it has never left its commitment to study and promote sustainable use of marine and fishery resources.

As a testament of its continuous dedication, the Bureau of Fisheries and Aquatic Resources (BFAR) awarded the College “The Gawad Pagkilala”, an award of commendation given to stakeholders or partnering institutions which have shown exemplary contributions in fisheries conservation and management. DNSC was one of the two recipients of the said distinction in Region XI.

President Joy Sorrosa and Research, Extension and Production (REP) Director Girley Gumanao received the award in behalf of the College during the 56th Fish Conservation Week Celebration at the PCA Covered Court, Diliman, Quezon City, last September 16, 2019. The awarding was dubbed as the “Parangal sa Mga Kabalikat sa Pangisdaan” and was primarily conducted to strengthen inter-agency partnerships for the conservation and protection of fisheries and aquatic resources.

The College earned the award by qualifying through several criteria. DNSC had definable accomplishments as an institution, and these accomplishments were aligned to BFAR’s mandate to not just conserve and protect fisheries and aquatic resources, but also ensure sustainable development and production. The College’s accomplishments were positively impacting different communities and the services rendered were voluntary for the sake of the environment.

DNSC, through its REP Unit, submitted a consolidated document to BFAR which entitled; “Conservation Bright Spots in Davao Gulf and Beyond: Linking Marine Biodiversity to Fishery Stakeholders for Sustainable Cities and Coastal Communities”. The report summed up the environmental advocacies and initiatives of the College, especially for marine wildlife conservation. The term, “Bright Spots”, was key in emphasizing that the College wanted to bring solutions to environmental problems by inculcating sustainable behaviors to varied stakeholders.

The College is not slowing down. It still looks forward in actively participating and initiating projects that can create a better and richer marine ecosystem. DNSC appreciates the recommendation given by the Bureau of Fisheries and Aquatic Resources Regional Office (BFAR XI) for the award, and for the Bureau’s untiring support to the College’s causes.

For the environment, for the greater good!