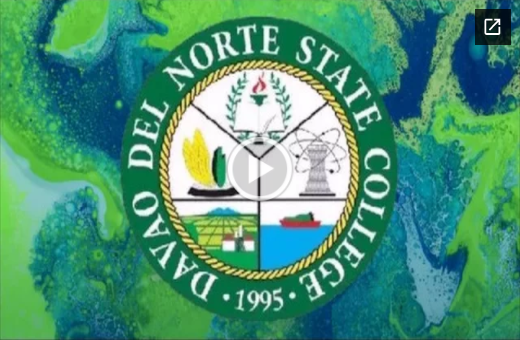 Davao del Norte State College is a “road less traveled*” itself. It is situated in Panabo, right in the middle of Tagum and Davao City (the first is the capital of Davao del Norte, while the latter is the promise in the Land of Promise). Panabo City Terminal is often used by drivers and long-distance passengers as a stopover, very seldom a destination.

But don’t get this wrong, it doesn’t feel like it’s jealous. It knows that all places amount to something. Davao del Norte State College is a microcosm of Panabo City, one way or another. Both accept the roles of existing away from the limelight. And this is why places like these surprise many people – of what they can do and what they have already done.

February of 2016, DNSC jumped off the year with a celebration of its history. Charter Day is an annual event of both commemoration and thanksgiving for the years and the people that make up the college.
On the same month, DNSC launched its Complementary Food Processing Plant and Products, supported by the Food and Nutrition Research Institute of the Department of Science and Technology, Region XI. The project was DNSC’s ticket to joining the nation’s fight against malnutrition.

DNSC became a technology adapter, acknowledging the importance of both science and its application. Fast forward on August, the college also celebrated Science and Technology Week. It organized a taste test of various products developed by its own food processing plant.

In 2016, DNSC also brought its students to the centerstage. The Supreme Student Council was represented on important board and council meetings, and were consulted on various undertakings. Instead of sheltering them away, the administration wanted to expose young leaders to the college’s issues and involve them in decision-making.

The Office of the Student Services led dialogues to establish an open conversation between the administration and different groups of students. There were general assemblies for academic and school policies orientation, drug awareness, disaster-risk management and forums for scholars and dormers.

DNSC recognized the talents of its students in various fields – sciences, arts, and sports. Students were supported in contests, like the CDAFFE XI (forestry and fisheries events), PASUC XI Culture and the Arts Festival, international conferences, and a lot more.

The college didn’t just focus on developing students according to their program offering. It acknowledged their show stopping talents and skills by mounting the Scholars’ Day, DNSC Yearend Party, Kalibulung and the Kalibulongan Festivals.

With the same aim to give its students only the best, DNSC went for a more difficult road last year. In October, it completed its local evaluation for State Universities and Colleges Levelling and presented the results to the Regional Evaluation Committee, governed by the Commission on Higher Education in the region.

A month after, the college welcomed eleven (11) accreditors from Visayas and Mindanao. They were sent by the Accrediting Agency of Chartered Colleges and Universities in the Philippines (AACUP), Inc.

These two academic exercises pushed DNSC to improve the quality of its instruction and services. As what President Jonathan Bayogan emphasized when he welcomed the accreditors, “on the next days, we will look into how we are able to comply with standards to attain certain level. We practice excellence and mind how we should improve as an institution, if these attitudes are exercised, passing becomes a by-product.”

Excellence as a practice. A simple phrase that took and still is requiring a lot of toil from the whole DNSC community. After days of some tears, sleepless nights, and constructive arguments – all the hard work paid off when the college received a positive response from the assessing board of the SUC Levelling. And early this year, AACCUP certified the passing of all seven programs in its latest survey.

But what was really DNSC’s greatest takeaway from these experiences? The excruciating process could be a baptism towards a reformed and more capable DNSC in the future.

One thing to remember, the people who got the job done in 2016 wouldn’t be the sole beneficiaries of their own efforts. It could take a while to materialize, but everything they did would change the course of the institution.

Speaking of changes, DNSC wouldn’t be the same again after it formally opened classes in the Municipality of Talaingod. 41 Ata-Manobos were given a chance to tertiary education after the establishment of Datu Jose A. Libayao: DNSC Extension Campus last October.

When the management traveled for the inauguration and signing of the Memorandum of Agreement, the trip became a homecoming. DNSC was reminded of its first mission, of providing higher learning even to those who were “unprivileged and underserved.” The roads that the college chose in 2016, especially in Talaingod, weren’t easy but they were all worthy. They changed the college’s perspective and renewed its sense of purpose.

DNSC welcomes 2017, surely with higher standards. But it can’t promise to deviate away from “roads less traveled”. Maybe, this is its identity – to stay in the outskirts and provide genuine service to those who really need it. (end, CNL)