DNSC leaps 81 spots in Webometrics Ranking and lands at 153rd nationwide, its best yet 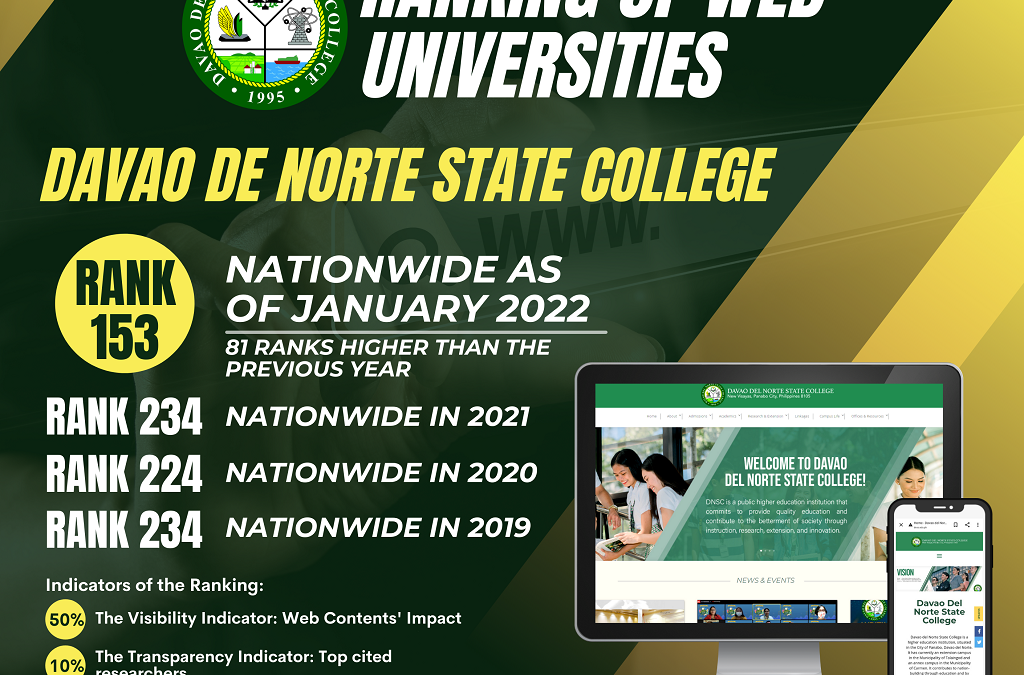 PANABO CITY – In the most recent publication of the Ranking Web of Universities (Webometrics) last January 2022, Davao del Norte State College exhibited a huge leap from ranking 234th in the country in 2021 to 153rd in 2022.

Webometrics releases its list every six months and is the largest academic ranking of higher education institutions, known for offering “independent, objective, free, open scientific exercise for providing reliable, multidimensional, updated, and useful information on the performance of universities worldwide.”

In 2019, DNSC was ranked 234, improving the year after on the 224th spot. DNSC went back to the 234th spot in 2021 before finally making it within the top 200 schools again in 2022. Webometrics uses three indicators in its evaluation: Visibility, Transparency, and Excellence.

The Visibility Indicator (50%) measures the web contents’ impact, while the Transparency and Excellence Indicators (10%, 40%) are focused on research citations. The sources for these data are disclosed on the ranking body’s website. It is emphasized that the Webometrics result is not a ranking of institutional websites but an actual ranking of universities and colleges using their digital footprint as indicators.

In order to ensure that the College is responding to the call for innovation in the Fourth Industrial Revolution, it has strengthened its web presence by reconstituting its web team and institutionalizing its plans to improve the College’s official website and other social media accounts.

Last 2021, the revamping of the College’s website commenced through the help of on-the-job students from the Institute of Computing and spearheaded by the Technology Support Services Unit and the Public Information Office. The revamping was sustained until its launching during DNSC’s 27th Charter Day last February 14, 2022.