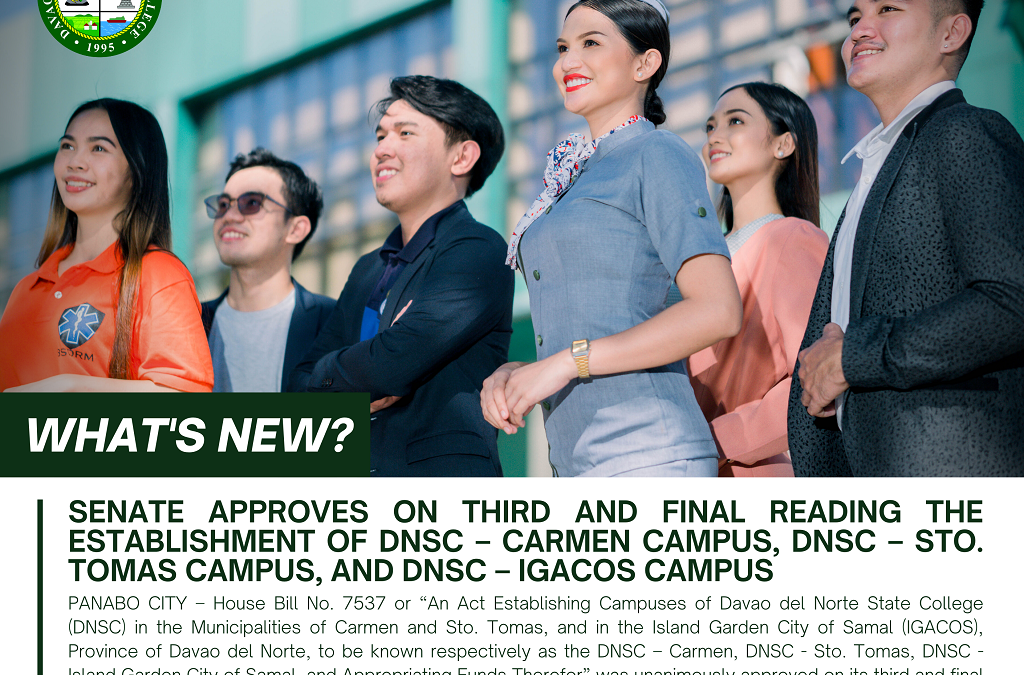 PANABO CITY – House Bill No. 7537 or “An Act Establishing Campuses of Davao del Norte State College (DNSC) in the Municipalities of Carmen and Sto. Tomas, and in the Island Garden City of Samal (IGACOS), Province of Davao del Norte, to be known respectively as the DNSC – Carmen, DNSC – Sto. Tomas, DNSC – Island Garden City of Samal, and Appropriating Funds Therefor” was unanimously approved by the Senate on its third and final reading, last January 17, 2022.

The bill was authored by Davao del Norte Second District Representative Alan “Aldu” R. Dujali, and was introduced together with representatives; Mark O. Go and Eric Go Yap. The bill hopes to expand the services of DNSC to the aforementioned areas, improving the accessibility to higher education in Davao del Norte. The extension campuses are set to offer short-term, technical-vocational, undergraduate, and graduate programs that are relevant and responsive to the needs of the current time.

During the Senate session, there were 22 affirmative votes, no negative votes, and no abstention. The proposed bill will be transmitted and will await executive action from the President of the Philippines.

The Office of Representative Dujali closely coordinated with the Commission on Higher Education Region XI, headed by Director Maricar Casquejo, Local Government Units of Carmen, Sto. Tomas, and IGACOS, as well as, the Board of Trustees and technical working committees of the College, in fulfilling the requirements for the expansion.