RA No. 11855, an act establishing DNSC campuses in Carmen, Sto. Tomas, and IGACOS, now a law 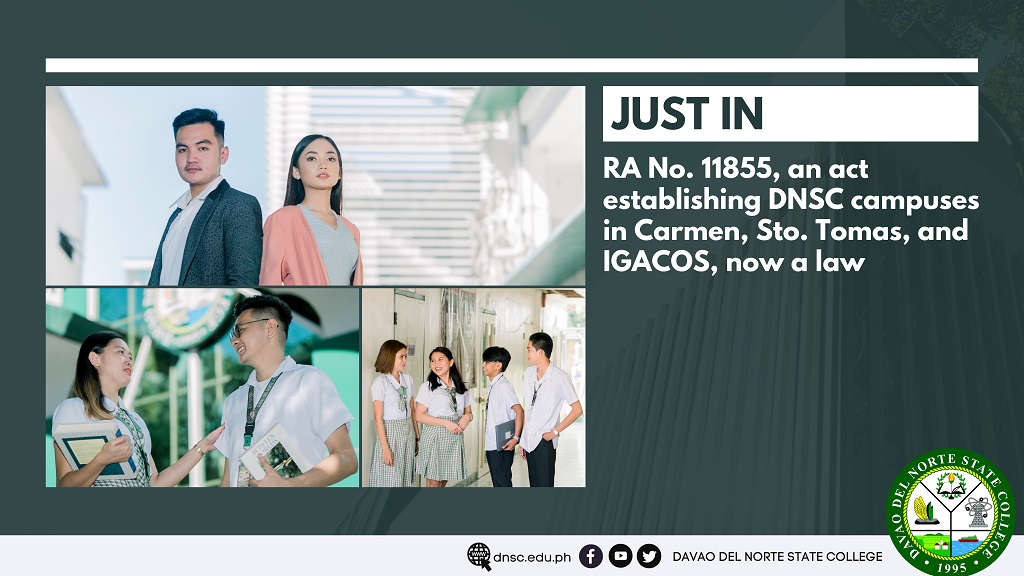 PANABO CITY – Republic Act No. 11855 or the ‘Act Establishing Campuses of the Davao del Norte State College (DNSC) in the Municipalities of Carmen and Sto. Tomas, and in the Island Garden City of Samal, province of Davao del Norte, to be known respectively as the DNSC – Carmen Campus, DNSC – Sto. Tomas Campus, and DNSC – Island Garden City of Samal (IGACOS) Campus, and appropriating funds therefor’ lapsed into law last June 18, 2022.

The campuses are set to provide short-term, technical-vocational, undergraduate, and graduate courses that are in pursuant to the mandate of the College and are responsive to the human resources development needs of the Province of Davao del Norte and the region. Faculty members and students are also encouraged to undertake research and extension initiatives.

Before the RA’s enactment, its house bill (HB 7537) was filed by Davao del Norte 2nd District Congress Representative Alan “Aldu” R. Dujali and had undergone series of readings and committee reviews by the congress and senate. It received a unanimous approval from the Philippine senate’s third and final reading last January 17, 2022 and was duly endorsed for the signature of the President of the Republic.

The President wasn’t able to sign the bill. However, in accordance with the constitutional provisions on final legislative actions, a bill may still become a law, even without the President’s signature, if it remains unsigned within 30 days from the receipt in his office.

The College looks forward to deliver its mandate and serve more students and communities through this expansion. Its heartfelt appreciation goes out to Representative Alan Dujali for setting the RA’s groundworks, to the Commission on Higher Education for continuous guidance as we fulfill the documents needed by various panels and committee reviews, local government units of Sto. Tomas, Carmen, and IGACOS, and to all our stakeholders.